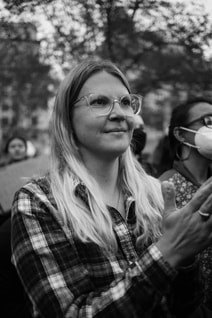 Emily Breeze (she/her) is a lesbian writer based in Manhattan; her plays focus on queerness, sisterhood,
and mental illness.  Her plays include MOTHER SAYS SHE'S SHOCKED HER CHILDREN
ARE UPSET (Part 5), HEDY, FALLOUT, and TITLE NINE, a one-act ALL MY DEAD
UNCLES, and a collection of short plays produced for Fast & Furious and 7x7 at The Tank. Her
ensemble piece YOU OWE ME YOUR BONES was set to be performed as part of the
Edinburgh Fringe Festival in August 2020, through a commission from CalArts. She has assisted
on shows at Hampstead Theatre, The National Theatre, The Public and more. She has developed
work with The Bechdel Group, Baggage Productions, The 24 Hour Plays, The Tank, UTSC.
Awards include the 2020/21 Guilford Performing Arts Festival Artist Award for her play THE
HOMEWRECKER (co-written with Marialena DiFabbio), and the 2021 Rising Artist Award for
her play HALLMARK. She is a current Dairy Hollow writer-in-residence, a former Long Wharf
Theatre Artistic Resident and former Hot Bread Writer-in-Residence. BA Vassar College.

Emily can be found on New Play Exchange and on her personal website.

The Bechdel Group is proud to support Emily's work on Go Home Annie.

What Emily has to say about this project:
"This will be a look at Antigone, to re-examine what it means to make an argument as a young teen girl, when everything in society is positioned to discount your ideas and opinions on the basis of your age and gender. I want to examine teen girlhood without the lens of sex,
without robbing young women of their sexual agency and desire. I want to look at the way women are trained to convince without arguing, and the limits of gender identification inside an argument. I want to play with a chorus of social expectations of womanhood, trouble the idea of growing up, and create a version of femme tragedy that doesn’t end with violence against women."

What Emily has to say about her work:
"I like to use adaptation as a framework, either adapting my real-life experiences into theatrical experiences, or transcribing canonical works into modern pieces. Often my canonical adaptations are indirect, and I take it as a compliment when a reader tells me they didn’t catch
the source material on a first pass. I think as theatre-goers, we are used to being told that the best stories are universal, and universal usually just means white straight cis and male. I like to use adaptation to play with specificity- how much of a story remains recognizable when gender and sexuality and (dis)ability are expanded? What does a hero (or anti-hero) sound like? How can I build something new from a source that never intended to acknowledge my humanity?"

You will be invited to hear and discuss selections from Go Home Annie in May of 2023 and to attend a full staged reading in August 2023.